The mill’s 4th floor is transformed into an event-filled virtual indoor streetscape, with storefronts, lounge spaces, and a small theater.

February 11, Councilor Mercier requested a report for the current status and future plans for the building known as Mill No. 5 in response to a neighbor’s concerns. [1]

However, perhaps to their surprise, Councilor Mercier and Belanger “discovered the best well-kept secret that could be incubating in an old mill building,” when touring Mill No. 5. It’s a “secret” of which many of us have been aware for some time. Before it opened last year, a Boston Globe article called it, “at heart an office building for small businesses and technology start-ups… renovated with a kind of fun-house brio to attract the eclectic, off-beat, and hip.” [2]

I’m not sure if Aurora and I are eclectic, off-beat, or hip, but we’ve started attending every “A Little Bazaar Presents,” the monthly arts/crafts/more marketplaces at Mill No. 5. At March’s marketplace, “Pulp and Press,” Aurora and I bought a gift for friends and couldn’t resist buying a few “gifts” of our own. We purchased a clock and coaster set adorned with recycled maps and moon charts from Cadence Innovative Designs. To show off our finds, we decided to let you in on the Mill No. 5 “secret.”

There’s an indescribable energy in Mill No. 5, as if one could turn a corner and find anything. Friends bump into friends while DJs or live bands play anything from the newest alternative hit to smooth jazz. Permanent shops such as Vinyl Destination complement marketplace vendors or other events, and there’s always a niche to steal away to enjoy your cup of coffee and watch the people. It’s a clubhouse and a mall without the worst bits of either.

Mill No. 5 has history. It was originally part of the Appleton Manufacturing Company. Once called the “New Mill” to distinguish it from the original 1828 mills, it was built in 1873 and expanded in 1918. It is actually the oldest surviving Appleton Mill building, as the rest of the complex was demolished and reconstructed in the early 1900s.

The mill was built for a new technology: steam power. New inventions in the 1840s greatly improved steam engine’s reliability, allowing mills to be built away from the canals.[3] Although the mill’s boilerhouse was demolished in recent years, the turbine house is still viewable from Middlesex Street. I’m told it still contains the entire original steam turbines, like something from an H.R. Giger illustration.

Appleton moved production south in 1927, but leased its buildings to the Suffolk Knitting Company and other tenants. The properties changed hands several times,[4] and in 1975, Jim Lichoulas Sr. purchased the complex.[5] By then, Suffolk Knitting had gone out of business,[6] and it was difficult to find industrial tenants.[7] However, new types of tenants moved in. Over the years, Kronos Corporation, Lowell Community Charter Public School, TransMag Inc, and even, briefly the Revolving Museum.[8] However, the fourth and fifth floors of Mill No. 5 largely remained vacant. Many properties in Lowell had difficulty redeveloping prior to mid-2000s changes in the zoning which had previously prevented residences being built in many formerly-industrial sites.[9]

An old, neglected mill building is little by little transforming into an eclectic, state of the art, awe-inspiring establishment. -Councilor Rita Mercier

The current chapter of Mill No. 5’s story begins with Constantine Valhouli and Jim Lichoulas III.[10] They were kind enough to answer a few questions about the development. They describe Mill No. 5 as a dream project more than a decade old, and they had collected architectural salvage to create the indoor streetscape for nearly that long. They wanted to provide aspects they felt were missing in Greater Boston to bring dining, shopping, entertainment, and office space under one roof, allowing people to go from work to a yoga class or movie merely by crossing a hall. In addition, the space offers short-term leases for businesses just starting out.

Walk down a crooked alley. Look both ways—make sure you haven’t been followed. Then enter and be amazed!

We’re having a lot of fun taking the time to make sure that it feels right. Also, doing it this way allows us to adapt the design based on feedback, rather than sticking to a more rigid plan of development. -Jim Lichoulas III

The process has seemed slow and meticulous at times, and that is by design. They’ve opened in phases, allowing feedback to shape both physical and event development. Some of the key attractions are planned to open summer 2014, including a farm-to-table café, yoga studio, and movie theater. A small number of neighbors have complained of this uncertainty, but by and large, neighbors have been supportive and included in the process. It’s been a balancing act for the developers, who want to maintain a “sense of discovery” while being open and inclusive. Perhaps Councilor Belanger’s council meeting suggestion that “There was a bit of mystique about the building,” was appropriate.

There seem to be so many places that over-hype themselves and market themselves to the nth degree. There’s no sense of discovery with that, no feeling of adventure or mystery. Some folks have described coming to the mill for the first time as finding this unexpected oasis at the edge of downtown Lowell. -Constantine Valhouli

The physical space is only half the story, and the developers hope to fill it with “shopping, food festivals, farmer’s markets, film festivals, author lectures, theater, dance, poetry, and shows.” “A Little Bazaar Presents” is a perfect fit for the eclectic space. Amelia Tucker, artist/community organizer, wanted to create a market event for some time, and partnering with Mill No. 5 gave her an opportunity to “push the creative boundaries around ‘craft fairs.'” She and her husband plan events months in advance, secure vendors, organize live performances, and has even invited food trucks to the events.

Everyone I corresponded with recognizes the mill can have impacts outside its walls, and—all kidding about “uncovering secrets” aside—this is what the City Council recognized in their February meeting. Ms. Tucker reported that A Little Bazaar has had visitors ranging from college singles to families to seniors from Greater Lowell, Boston, and as far as Providence, RI and Western Massachusetts. She encourages these visitors to “make a day of it” and visit other nearby attractions. When I asked about Mill No. 5’s neighborhood context, Mr. Lichoulas spoke of the mill’s role in connecting the neighborhood with the downtown and credited the “efforts of the JAMBRA, and of Karen Bell’s leadership in particular” to address issues and increase the neighborhood’s desirability.[11]

We’re at the edge of downtown, and some people have told us that we’re playing a role in anchoring and connecting this part of the neighborhood to the stretches of downtown that have historically had much more attention.

It’s also clear that this is just the beginning. Ms. Tucker has said she is considering outdoor markets with warmer weather and happily accepts theme suggestions for future events (Email lilbazaar@gmail.com)! In response to a question about whether Mill No. 5 is seeking additional events, Mr. Valhouli said, “Oh, hell yes.” They encourage folks with ideas both large and small to contact them. (Email hello@millno5.com)!

We would like to have a full calendar of events at the mill. Something every day. We’d love people to be able to come to the mill after work, and be able to say to themselves, I haven’t even checked the website but I know that there must be something awesome going on there. -Jim Lichoulas III

Inside one of the “storefronts” at Love Buzz 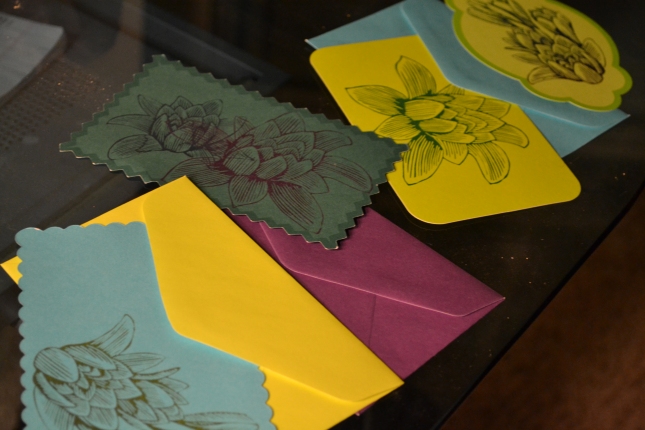 Unique greeting cards for less than the price of a Hallmark from http://www.trifectaeditions.com/ 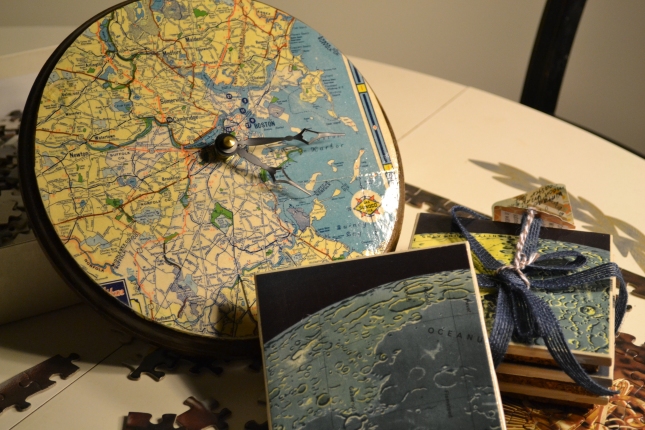 Visitors shop in the hallway of Mill No. 5 during “Pulp and Press”

I think Aurora and I could be convinced to go to classic cartoon screenings at least once a week.

[1] For Dick Howe’s report on the City Council meeting from which I quote, click here. ↩

[3] All this information and more are found in the 1979 Lowell Cultural Resources Inventory, digitally archived courtesy of UMass Lowell. The historical report is here, the individual report on the boilerhouse is here, and the report on Mill No. 5’s extension is here. I was unable to find a report on the original 1873 building. ↩

[6] I learned a bit about what happened to the Appleton Mills after Appleton left from an oral history transcript from the “After the Last Generation” project (Leni Joyce, informant; Mehmed Ali and Gray Fitzsimons, interviewer). ↩

[9] As I say in many posts, this is short-changing the subject. I really could write a whole story on the 2003 Master Plan and subsequent zoning revisions. ↩

[10] Although his family’s business owned the property for decades, Mr. Lichoulas III became the head of the company’s Lowell efforts only in the late 2000s. ↩

[11] Mr. Lichoulas is a member of JAMBRA’s board of directors. ↩

5 thoughts on “Mill No. 5: Local scene blooms where once there were power looms”