A couple of weeks ago, I attended the Post Election Community Dialogue, the latest in a series of open events the police force has held to try to clarify their own values and policy, while taking input from citizens about what their experiences and concerns are. This one focused on the “Post Election Environment” in which, politics aside, I think we can all agree a lot of people are feeling afraid and that evidence shows that hate crimes seem to be spiking.

Chief William Taylor, dressed in a suit and Christmas tie, started things off by introducing the officers in the room, as well as a representative from the FBI and State’s Attorney’s office. Then he read a prepared statement, clarifying the LPD’s policy on immigration status. In essence: regardless of your immigration status, the police want you to feel comfortable reporting a crime, calling emergency services, or asking for help. They say they don’t routinely run immigration checks in any of those cases. However, when they arrest someone, they do run a check, and it’s likely that problems would come up there.

The police in Lowell do collaborate with Immigration and Customs Enforcement (ICE) when ICE reaches out to them, but they don’t routinely reach out to them to try to remove otherwise law-abiding members of the community. Other cities, including Lawrence, have passed a “Trust Act” which limits their collaboration with ICE. Efforts like this are one of the things people are describing when they talk about becoming a “Sanctuary City” which actively tries to protect people living there from federal government deportation.

Right out of the gate, the first question was about this possibility, and it came up several more times. The question was raised by a representative from the emerging group Solidarity Lowell. Chief Taylor had clearly anticipated this question, and he explained that, as far as he’s concerned, that’s a question for the City Council. He did go on to say that, though he had no strong opinion about it, he thought that the current system works well and didn’t really see further steps as necessary.

A representative from the International Institute asked for clarification about access to interpreters. If someone is being interviewed by the police, they do have the right to be interviewed in their own language. If someone calls in needing help from the police, it’s challenging in Lowell to cover all languages, but they have access to resources. Another representative, following up on that, suggested more translation at community meetings.

Additional questions along these lines clarified that they just hired their first Arabic speaking officer. They also try hard to do outreach to new groups, including building a good relationship with the Islamic Society of Greater Lowell. Working to make sure new Lowellians know their rights is a priority, as is avoiding discrimination and implicit bias at work in the actions of officers. The newly reformed Race Relations Council, a citizen advisory group made up of diverse community members is a step in the right direction that helps make sure that the Police force is hearing from everyone.

Next to come up is another issue on everybody’s mind: hate crimes. Captain Kelly said they haven’t really had any clear incidents reported to them. The rep from the International Institute said that she’s heard two reports of women having someone pull at their hijabs to try to remove them. For myself, I’ve heard about two separate incidents of Latino kids at school being taunted with the threat of being deported. The Attorney’s Office rep reminded people that these things can be judgement calls, but encouraged people not to hesitate to report them. It shouldn’t be up to the victim to try to figure out if something is a crime, the experts can do that. And if you hadn’t heard, in Massachusetts we have a newly created hotline to report harassment and intimidation.

A kid from Teen Block suggested that police officers need to work harder to make community members feel comfortable. He mentioned that officers meeting with kids at Teen Block is a step in the right direction. One of the officers who’s been working with youth quite a bit, especially on Dance for Peace, talked about how fun and rewarding that has been. Another representative of Teen Block talked about trying to make kids feel more comfortable with officers, especially those stationed at schools. Captain Taylor agreed, and said that officers at schools are meant to help people feel safe. Captain Kelly talked about a time when that’s worked well, when a teenager texting with a friend wrapped up in a dangerous trafficking situation approached the school officer to share her concerns about her friend.

There was an intense discussion around the issue of scammers posing as police or other officials targeting the immigrant population. This can be confusing even for people familiar with the way things work in the US, but for people who may come from countries where a certain level of bribery and corruption is normal, it can be especially confusing. To clarify, no government official should ever ask you for money or your social security number over the phone. It’s always okay, if you get a call, to ask to call back the official office to make sure you’re talking to someone legitimate. Sometimes these scammers can also come to the door, so it’s okay to ask to see a badge and credentials. Chief Taylor said that our neighbors are the best protection we have, and that we should all try to keep an eye out for our elderly and recent immigrant neighbors. I think you’ll be hearing more about this issue from the department soon. 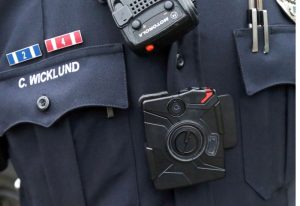 Body camera similar to ones being tested in Boston (WBUR).

I asked about something I’ve been wondering about: whether they were still considering any measures to increase accountability, like body cameras or a civilian review board. The thoughtful response on body cameras was essentially “no, but we might pick this issue up again in the future”. Reasons cited included expense and legal concerns. In Massachusetts, the police aren’t allowed to record you without your permission, so this makes the cameras a logistical problem. Additionally, there are concerns that people won’t want to talk to the police if they fear being recorded. Chief Taylor did acknowledge that other cities, including Boston, are trying it, and that because of the increasing number of security cameras and cell phones, “that’s probably the way that things are going”.

A civilian review board hasn’t been discussed much, but Taylor said that the review process we have for police incidents works. I asked a follow-up to clarify whether it’s legal to film the police, and Captain Taylor said, “absolutely”. In fact, they said they seldom arrest somebody these days without someone filming it.

Many people expressed concerns about the current political climate, and the refrain from the police was along the lines of, “nothing in Lowell is going to change on January 21st”. A pointed question from a person who felt less safe because so many police unions had endorsed Trump got a candid answer from Kelly: “I can understand why some officers sided with Trump, while I hope they didn’t agree with everything he said.” He explained that attacks on officers are way up, many of them feel less safe and their families are worried about us coming home at night. Additionally, he said that he’s seeing some evidence that officers hesitate to use some methods now, because they “don’t want to end up on TV.” He said he tells officers that that’s good, but that it’s still their job to come home safe at night.

The packed house for this event makes clear that the community is concerned, but also that the community is actively committed to working together. Frankly, I’ve lived in communities where not only would the police never attempt to invite community input, if they did tensions were high enough nobody would be able to have a real conversation. In Lowell, there really is a genuine effort to be open to criticism and to hearing the fears in the community.

If you have a bad experience, especially if you feel your treatment is unfair, Captain Taylor is very clear that he wants to hear about it. You can come in to the LPD’s Headquarters at 50 Arcand Drive to file a complaint in person. Or you can call the LPD’s Professional Standards Division at 978-674-4507, or you can fill out this form and mail it in. If you have a broader concern or you’d like for officers to meet with your community group or attend an event, I’d consider reaching out to Sara Kuhn, who’s the Director of Community Relations and a very warm, easy to talk to person. She’s reachable by phone at 978-674-1906 or email at Skhun@lowellma.gov.